Building On Phase 1 Completed in 2020, Second Phase Will Tag Up To 60 Red Knots During Migration Stopover in Delaware Bay 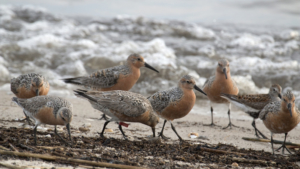 City, N.J. — Today, Atlantic Shores Offshore Wind (Atlantic Shores) announced a second phase of last year’s successful red knot migration study in collaboration with Wildlife Restoration Partnerships (WRP) and the U.S. Fish and Wildlife Service. This expanded second phase includes a doubling of the red knots tagged, now 60 birds, and a new partner, the New Jersey Audubon, one of the oldest, largest and most respected environmental organizations in the state.

Red knots, a state endangered and federally threatened shorebird, migrate each year from as far south as Tierra del Fuego, Argentina to the Canadian Arctic and then back again. On their trip north, they stop in the Delaware Bay to feast on horseshoe crab eggs before going to the Canadian Arctic to breed, just as they stop in New Jersey on their way south for the winter.

In the second phase of the project, WRP will attach satellite tags to red knots migrating south as they stop in New Jersey’s Brigantine Natural Area, Atlantic County, and Stone Harbor Point, Cape May County, and on birds in Lagoa do Peixe, Brazil as they migrate north. The tags will allow a satellite to collect up to 60 points of information on each bird’s precise location, flight path, and varying altitude. Collected data will be correlated with meteorological conditions (i.e., wind speed, wind direction, visibility, and precipitation). Data will be collected near real-time and more comprehensively analyzed by researchers and Atlantic Shores.

Atlantic Shores will use the data to address risks to these birds and the surrounding environment as they develop an offshore wind project within its Lease Area, located 10-20 miles off the New Jersey coast. Atlantic Shores has committed to share their findings publicly so as to inform other researchers and offshore work.

“Atlantic Shores is thrilled to be continuing this essential migration study, now with the invaluable partnership of the New Jersey Audubon,” said Jennifer Daniels, Atlantic Shores Development Director. “The second phase of the red knot study enables us to responsibly develop our Lease Area while helping to deliver cutting-edge data to scientists in a range of fields.”

“Results from this study will inform collaborative conservation for this amazing long-distance traveler, whose migratory routes from Arctic Canada to southern Argentina span up to 18,000 miles annually,” said Wendi Weber, North Atlantic-Appalachian Regional Director for the U.S. Fish and Wildlife Service. “This effort exemplifies how much we can accomplish for wildlife and people when industry and conservation organizations join forces.”

Eric Stiles, President and CEO of New Jersey Audubon added, “New Jersey Audubon is pleased to be part of such an important study which highlights the need for science-based shorebird conservation and protection to inform responsibly-sited offshore wind facilities. We look forward to our continued collaboration with leading conservation organizations as we move to phase two”.

“The first study gave us an unprecedented and intimate understanding of the complex migratory pathway of the red knot that will help conserve all the places the bird depends upon during its lifecycle,” said Larry Niles of Wildlife Restoration Partnerships. “The second phase of the red knot study will give us decisive information on the possible effects of offshore wind development to the red knots off the coast of New Jersey. Atlantic Shores’ commitment to this study underscores their commitment to environmental responsibility and wildlife conservation.”

Stay up to Date
Get the latest news on the Atlantic Shores Offshore Wind project!