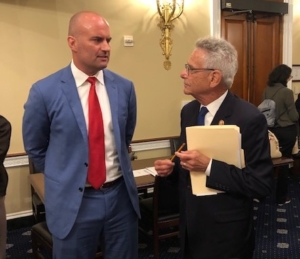 Chris Hart appeared in front of the U.S. House of Representatives Committee on Natural Resources today in support of the Offshore Wind Jobs and Opportunity Act

“If the U.S. offshore wind industry is to meet our mission of delivering safe, sustainable energy, we will need to hire many more workers, and these jobs will require hard hats and specific skillsets acquired with the proper training,” Dr. Hart stated in his testimony. “A recent study found the industry will need to employ more than 35,000 full-time employees to support 8 gigawatts of offshore wind. A similar report by McKinsey showed this number is roughly equivalent to a quarter of the domestic labor force employed by the oil and gas industry.”

The April 2019 report by McKinsey also identified significant concerns with the lack of adequate training and size of the skilled labor pool for offshore wind. The report noted that skilled trade workers, operations and maintenance technicians, and water transportation workers are integral to offshore wind project sites but are in short supply.

Dr. Hart stated that the proposed legislation would help address this issue by fostering collaboration between the Interior Department, offshore developers, local governments and labor groups to ensure individuals can obtain skills and training necessary to compete in this global industry. He went on to note that economic development and job training needs were not limited to the states where the turbines are located. In fact, the offshore wind industry plans to build upon domestic infrastructure and expertise in manufacturing offshore oil and gas structures and shipbuilding and transfer those resources to the offshore wind context. There is also a significant amount of transferrable skills from the onshore wind industry, which currently supports 114,000 jobs across all 50 states.

Chairman Alan Lowenthal stated that offshore wind plays a key role in our clean energy future, pointing out that the offshore wind energy potential for the United States is nearly double that of the nation’s current electricity use.

“Offshore wind is good for our planet, it is good for our economy, and it is good for national security,” he stated during the hearing. “We are well positioned for long-term success,” he added in regards to offshore wind, but, “we must pursue it as aggressively as possible while, of course, making sure that we take in to account the needs of other stakeholders including fisherman and our military.”

Atlantic Shores, a joint venture between EDF Renewables and Shell New Energies, plans to develop an 183,000-acre lease area in federal waters off the coast of New Jersey. The lease area has the potential to generate 2,500 megawatts of clean, renewable offshore wind energy – enough to power nearly one million homes.

Prior to leading Atlantic Shores, Dr. Hart led various teams in the offshore environment for 23 years, including ten years of active duty service as a Special Operations Officer in the U.S. Navy and five years at ExxonMobil working on offshore energy projects. Dr. Hart also founded the U.S. Department of Energy’s effort to develop and implement a six-year, $500 million National Offshore Wind Strategy.

States, especially along the East Coast, continue to establish renewable energy standards requiring certain percentages of the energy come from renewable sources, including commitments to offshore wind. It is projected that over 18 gigawatts of offshore wind power will be contracted between 2020 and 2030 as a result.

Stay up to Date
Get the latest news on the Atlantic Shores Offshore Wind project!